Acceptable in the Eighties

A very unscientific attempt to go back in time

‘Most farenjis, you know, they try to have a job and to run, and they run maybe only a little bit’, Tadele said as we warmed down. ‘You, I think maybe you have no job.’ This has to be the best complement I’ve ever had on my less-than-fully-employed status.

Last year I ran 52.57 at this race, a hilly 10 miler. This year I ran 50.52. There was, I should admit, a bit of a tailwind, but I don’t think that accounts for two full minutes of improvement. Vindication, I think, for the 110 mile week. Tadele may have already been warming down on the grass behind the finish by the time I crossed the line, but he only beat me by 48 seconds, so I’m relatively pleased with that. He’s run 2.13 for a marathon and 63 minutes for a half.

Team bus and manager for the day. Team Sky have nothing on this – coffee and bacon sandwiches on the move.

As I didn’t know that there was anyone of such high calibre in the race, I led from the start, and after a couple of miles it was just the two of us. I focused on maintaining a pace as close to five-minute miles as I could, which meant that I was working pretty hard on the uphill sections. I even thought Tadele was struggling a bit at one point, but given the ease with which he got away from me in the last three miles that must have just been my imagination. 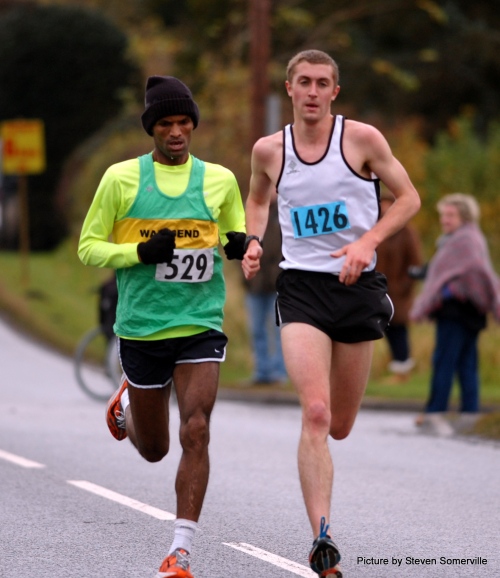 A couple of photos from the ‘Running Along Somewhere in the North East with an Honourary East African Geordie’ collection.

Eventually, just after the five mile mark, Tadele came past me, increasing the pace imperceptibly until there was a gap of a metre or so between us without me really having noticed I’d let a gap open. Then he turned his head to me and waved his arm. ‘Come on’, he said, ‘come on’. This was a familiar piece of encouragement – I’d heard it time and time again whilst on tempo runs in Addis Ababa, when the guys I was training with wanted to keep the group together and I didn’t want to be the farenji holding things up. I checked behind me and we were out of sight of the third place runner, so I decided to embrace this piece of camaraderie and hold on for as long as I could, even if it meant overcooking things a bit at the end. It felt pretty good to be hammering along the road, a tailwind behind us, just me and the sole Ethiopian in the race. It felt pretty good, that is, until just after seven miles when Tadele decided to really start running. He’d wanted the company, clearly, but not that badly. We went through seven miles in about 35.40, and he finished in 50.04, running sub-4.50 pace for the last three miles. No wonder I couldn’t prevent the gap from growing.

My mate Dermot and I are now tied for the Corstorphine AC club record at 10 miles and separated by only four seconds over the half marathon. Onwards, then, to the Great North Run, where I can hopefully make sure one of them is mine outright!